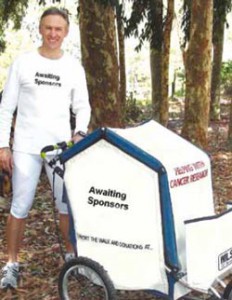 “I’m doing this walk to honour a close friend, mentor and former sports teacher of mine who passed away from cancer last year,” Mr Gibbens said. “He was a great Aussie who valued the importance of making connections. He used to organise charity relays and programs that encouraged students to use their talents for the benefit of others who needed a hand.

He touched a lot of lives and more than 1500 people turned up to his funeral. “I’d like to salute his spirit – and that of thousands of Australians who’ve battled cancer – during my walk. As a nurse, I’ve seen the suffering this disease causes, not just to patients but also to those close to them and I’ve wondered about ways that we can help find a cure.

I’ve called my walk ‘Join the Dots’ because when a lot of people do a little bit each, they can fill in the big picture.”

Money raised from corporate sponsors and donations will benefit four charities, including the Children’s Leukaemia and Cancer Research Foundation in WA. As well, Mr Gibbens is inviting people to write to him to nominate themselves or someone close to them with personal experience of cancer to be inspirations during his walk. (No donation is needed for nominations and all will be accepted.) “If the person you nominate has died, please include their age at death or the year they died. For privacy reasons, if you want to nominate someone who’s battling the illness or has survived it, please discuss it with them first and get their permission.

“Include a brief description of your nominee’s greatest strength, ability or a special quality. It might be things like a sense of humour, skill in fixing things or determination.

I expect to be walking for 90 days. By starting each day with the example of someone who’s battled cancer or is facing it now, I’m sure it’ll help me focus and keep me putting one foot in front of the other until I reach Sydney.

“And if I get so many nominations that each day starts with not just the name of one person, but of a whole group, that’ll be even better.”