Childhood Cancer is not fair under any circumstance, and for the Higgs family the news couldn’t have been worse when they were told that their youngest son Finlay was diagnosed with Stage 4 High Risk Hepatoblastoma.

“Childhood cancer is not something I ever imagined, that anyone ever imagines will come into their lives. I can’t describe what this time was like it was indescribable at best I would say we always, always clung onto hope, that was what got us through.” 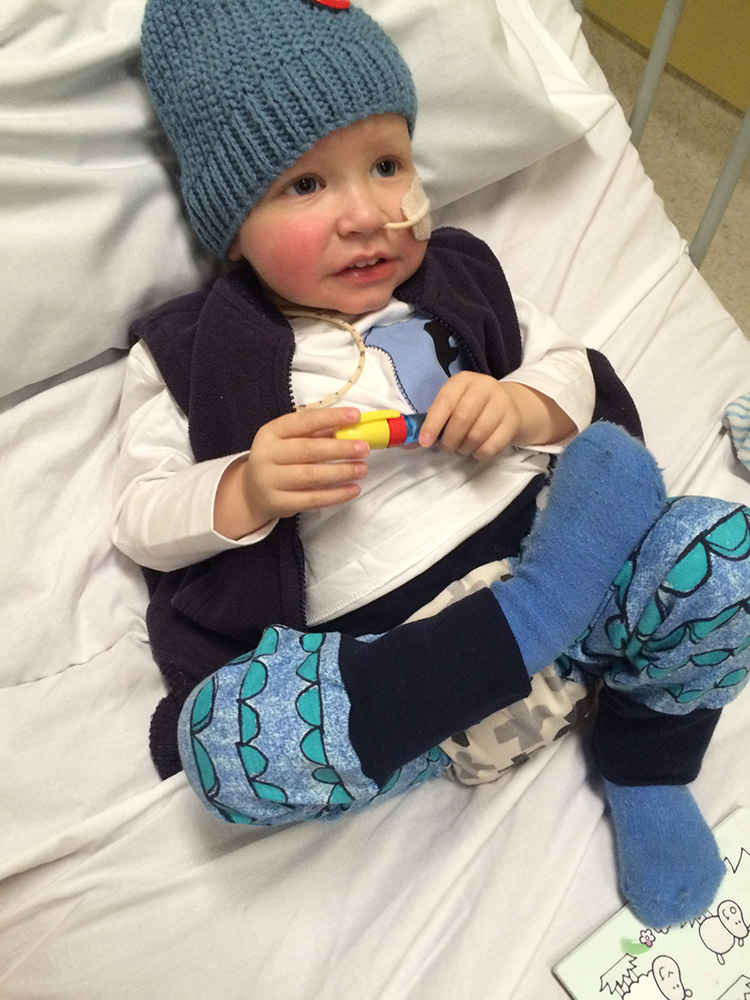 We are privileged to be able to share some of the Higgs’ family journey with you and hope with your help we can continue to fund research into childhood cancer. Here is Finlay’s story:

Our little boy looked so healthy. He’s got the most amazing beautiful sparkling blue eyes, the glowing kissable cheeks and a healthy amount of squishiness. He was our little roly poly bubba. A gentle placid soul with the most infectious giggles you’ve ever heard. A true sweetheart.

Nothing was amiss until the Australia Day long weekend 2015. My 18-month-old baby had no fevers, no cough or sniffles and no sign of any illness or that anything was wrong. However I noticed as he spent lots of time in his swim nappy, that his tummy looked a little more distended than usual. He was always my roly poly baby with lots of delicious chubbiness and he’d always had a big belly. We loved his big belly, it was the perfect spot for tickles and kisses! This time his belly looked slightly uneven and when I felt it, he had a definite firmness on his right side compared to his left. 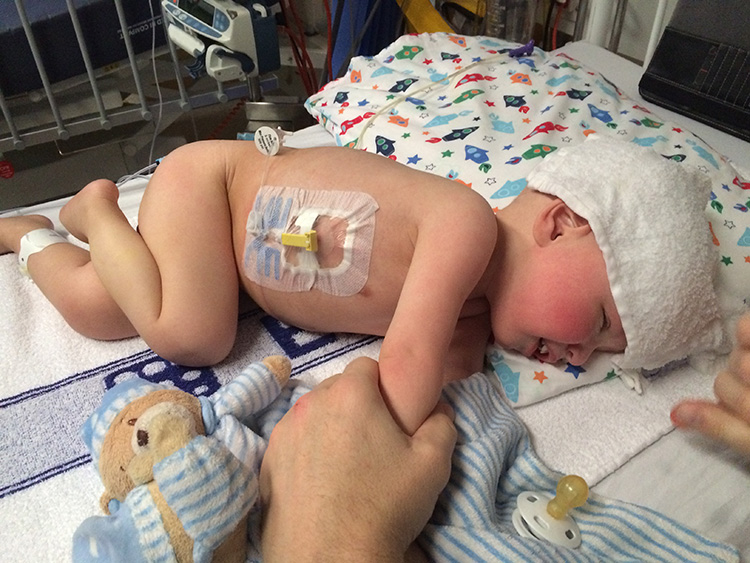 Joondalup hospital conducted the ultrasound and I was starting to feel really nervous. I kept telling myself that he had a build-up of poo and that was all, however I must admit my mind was going through the worst case scenario thinking, “what if it’s a cyst or growth? What if he needs surgery to remove it?” That was the worst I could bring myself to consider, no one expects their perfectly healthy baby to have cancer. That’s not even possible!

On Monday 2nd February we arrived at Princess Margaret by 8am and were ushered into an office by the liver surgeon who explained that there would be some other Doctors joining our meeting shortly. The doctor spoke more in depth about how she planned to do the biopsy, where the incisions will be, how much liver she would take (quite a fair bit due to the size of the tumour) and how long it would take. The doctor then stated that she would need to make an incision in Finlay’s neck for the port line to be inserted and one on his chest to place the button.

We had not yet been told about him having a port line so were confused. Luckily the other Doctors arrived in the room, explained about the port line, showed us diagrams, gave us one to hold and told us it was so they can administer Chemotherapy… hang on, chemotherapy? Yes your child does have Cancer, the biopsy will tell us exactly what type of cells are present in the tumour, but yes your child does have cancer… Cancer? Cancer? Yes, liver cancer… cancer… it is quite rare… excuse me what, cancer? You know this for certain already? Yes cancer… a form of childhood cancer… it has spread… it’s on his lungs… cancer… stage 4… cancer, what? Cancer… how? There is no known cause… high risk… why? Nothing you or anyone could have done… cancer… treatment will be aggressive… cancer… we will start this week… cancer… cancer… do you have any questions… cancer… cancer… cancer… sorry where has the floor gone… just what… what’s happening… cancer…

This day was the official date of Finlay’s diagnosis of Stage 4 High Risk Hepatoblastoma. At diagnosis he had a very large tumour growing throughout the right lobe of his liver. The tumour had spread through his diaphragm and had metastasised in multiple locations throughout both his lungs. The spread of his cancer meant he was given a 30% chance of survival.

Finlay was started on a treatment protocol immediately, which involved high doses and multiple forms of Chemotherapy. His tumour was too large to safely operate on and the plan was to remove the lung mets and hopefully shrink the liver tumour down with the chemotherapy. Unfortunately however, by round 4 of Chemotherapy Finlay’s AFP’s began increasing and a CT scan showed the lung mets still persisted and there had been minimal change to the liver tumour. 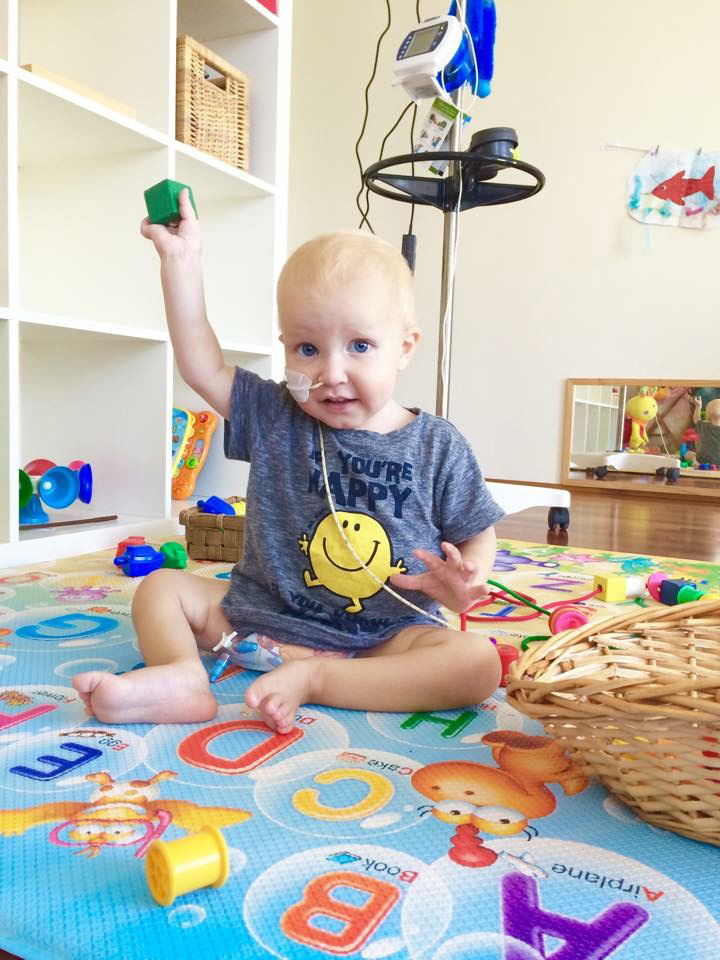 We were told Finlay had a drug resistant disease and that his only option was to attempt the surgery as soon as possible. Finlay’s surgery went for over eight hours before he was brought to the PICU. The amazing surgeons had managed to remove the entire right lobe of his liver, leaving only the much smaller left lobe behind. They removed his gall bladder, bile ducts and also cut out a tumour from his diaphragm and repaired it. Finlay was left ventilated and sedated for a number of days, so his body could heal before slowly weaning him off it and waking him up.

Finlay was asleep for almost the entire first week after his surgery but then he woke, gave us that bright beautiful cheeky smile of his and we had our boy back. Pathology on the tumours came back showed that the cancer was active tissue however all margins around the tumour were clear of cancer cells, which was promising news.

To this day Finlay continues to fight this horrendous disease. Through multiple surgeries and treatments his diagnosis has now changed to stage 4 High-Risk Refractory Hepatoblastoma. He is a miracle to have survived. Finlay has received more chemotherapy than protocol. They can’t give him more of these drugs. There are others but with clear scans and relatively normal AFP’s they will not try them yet.

Finlay is doing really well, considering. He started walking in January, he does however have compression fractures on the spine which are being closely monitored and have remained stable between his last two scans. He is currently receiving CT scans every three months along with liver function and AFP tests.

Finlay also wears hearing aids due to hearing loss caused by the chemotherapy drugs and visits with his teacher of the deaf every fortnight and also his physical therapist. He regularly attends an early intervention playgroup at PMH and his next scans are due in July. He will also require annual kidney function testing and cardiac testing, the battle is ongoing.

Thank you for reading, thank you for supporting us. This isn’t a sprint; it’s the biggest hardest scariest marathon of our lives. We need you cheering us on and supporting such an important cause as the Children’s Leukaemia & Cancer Research Foundation. Please don’t leave us alone to fight this. – With Love Katey