It’s official! Perth has made its way into the record books for the world’s Longest Awareness Ribbon! Finally confirmed this week, the Children’s Leukaemia & Cancer Research Foundation (CLCRF) were elated when they received the news that they are now Guinness World Record holders.

Children’s Leukaemia and Cancer Research Foundation worked with schools from across WA, along with families and members of the community to sign segments of yellow ribbon, all of which were then sewn together to reach the world record-breaking length. 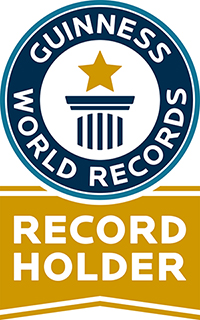 The Keep the Flame Alive World Record Ribbon Day saw volunteers from all sectors of the West Australian community come together at Langley Park, in the City of Perth, on Saturday 19 April 2014 to take part in this momentous event. From children as young as three to grandparents, everyone gathered to help unfurl the ribbon and lay it out in the traditional awareness ribbon shape, which was then photographed from the air.

When the final length was reported of 1,940 metres, a cheer erupted from the crowd. This amazing result had smashed the previous world record for an awareness ribbon by 693 metres! The messages of hope and support for sick children are to help raise awareness of the need for continued research into childhood cancers.

The Longest Awareness Ribbon initiative was supported by The Hon Peter Collier MLC, Minister for Education, Perth’s Lord Mayor Lisa Scaffidi and the City of Perth.

“It’s fantastic to see such a great initiative taken to raise awareness for continued childhood cancer research, and it’s great that the city of Perth has yet another world record to add to its list of wonderful achievements.” said Lisa Scaffidi.

That’s not the end of the ribbon’s incredible story. The final destination for such an important piece of fabric, is the new Children’s Hospital, where it will hopefully be used for the opening in 2015. It will also enable future generations of children, desperate for hope, to read the messages of love and support, and inspire them to continue their fight.

View photos from the Keep the Flame Alive Ribbon day on our Facebook page.