Dance For A Cure is an event that raises funds for the Children’s Leukaemia and Cancer Research Foundation.  Taking place on Sunday 18 November in Forest place, this event is for the dancer in all of us.  The theme this year is superheroes, so get your cape on and register now on the Dance For A Cure website.

Around The Sound spoke to the Dance For A Cure’s coordinator, Kylie Dalton.

Kylie Dalton is a superhero.  It’s a crown that doesn’t rest well on this unassuming woman.  She doesn’t wear the outward mantle, there’s no cape or amulets, no showiness at all, but spend a few moments with Dalton and you know what it’s like to be caught up in her passion and urgency to create change and better lives for the people around her.

“If you only do one thing for charity this year, this should be the one.”

Here are all the reasons why.

It’s fun…
“It’s just fun.  It’s so much fun!” says Dalton.  As a committed non-dancer, even I’m warming up to the idea of joining in at this point in our conversation.  This is a woman how knows how to generate enthusiasm.

“Dance for a Cure has grown from a flash mob I did in 2012.  I had somebody approach me wanting to do this flash mob in honour of a young lady that passed away from leukaemia, and I was like, ‘I can help you with that!’  Me being me, I don’t do anything by halves; I found out later, after I’d organised the event that she was thinking about 25 people, something really small, and 700 people turned up!”

“That first year, everybody had so much fun.  There was so much joy on people’s faces.”

… But it’s not a fun run …
“The whole reason I started Dance For A Cure, is I hate fun runs.  I hate getting up at five in the morning and everybody does fun runs and bike treks, so I thought how do we put music and dance together with something that is so fundamentally important to everyone, and that is families that are going through childhood cancer.  There are so many of them, it’s the most prolific of childhood deaths.”

… And, the serious part, it’s for the kids.
As she begins to speak about her connection with the Children’s Leukaemia and Cancer Research Foundation and the families and children that she works with, those directly affected by cancer, Dalton immediately begins to well up.

“My motivation is that I work with kids that go through cancer.  If I can’t find some joy for them then what are we doing?  And, it’s because they can’t that we should.”

“Nobody tells the family’s story, the constant struggle.  They might be in remission, but they might end up back in hospital the next day, or the next week, or the next year.  And it also doesn’t mean that they then don’t have a lifetime of complications from the chemotherapy.  We’ve got people that have liver damage, there are so many affects from the drugs used.  They might have fought cancer and effectively won, but have they really?  Their whole life is affected.”

At this point, Dalton excuses herself and leaves the table so that she can compose herself.  This is the serious end of the conversation, the part where I learn that, behind the aura of fun, the can-do approach to her life and work, Dalton is a woman whose humanity runs deep.  After a few moments, she returns to our table, continues where she’s left off, the steel in her eyes glistening with residue of her tears.

“It’s a lifetime diagnosis, because the treatment protocols that the kids are getting at the moment are for adults and they just adjust it based on dosage and not necessarily on what a child’s body can cope with.  Children’s Leukaemia, since I’ve known them, have been funding research on how to change the protocols.  They’re so close to clinical trials, but it just takes funding.  We’re this close to finding solutions to being able to lessen the harm on the bodies of children.”

“When they become cancer free for five years they then spend the rest of their lives dealing with what it’s [chemotherapy] done to their body, their livers, their kidneys, their bones, their teeth, their eyesight, their hearing, their learning ability.  So, yes, they might have no more cancer in their body, but they are in and out of hospital for their rest of their lives dealing with the after effects.  If we can find a better way for the treatment protocols that we have now to work for kids, or targeted therapy, their outcomes could improve exponentially, and they can live much better lives than they’re living right now.  So, that’s my motivation.”

There’s not really much more that needs to be said, except to share the logistics.

The event is being held on Sunday 18 November in Forest Place from 9.30 am – 12.00 pm (no early starts).  Registration is via the Dance For A Cure website.

The theme this year is superheroes.

“This year, we’re doing a superhero dance.  So many kids are being pulled out of remission and going back to treatment at the moment, which is really, really heartbreaking, because I work with the kids.  We’ve done yellow T-shirts, which is the childhood cancer colour.  This year I wanted to do something different.  All the kids love to wear superhero outfits, so let’s get everybody dressed up in superhero costumes, or hero costumes, whoever your hero might be.  Our volunteer team chose Bonnie Tyler’s ‘Holding Out For A Hero’ as the song for people to dance to, so it will have wide appeal having been on the Shrek soundtrack and being first released when the parents were a bit younger.”

If you’re thinking of going (you definitely should), here’s a photo of Kylie Dalton.  If you don’t have a superhero costume, just come along as Kylie, she all the superhero you’ll ever need. 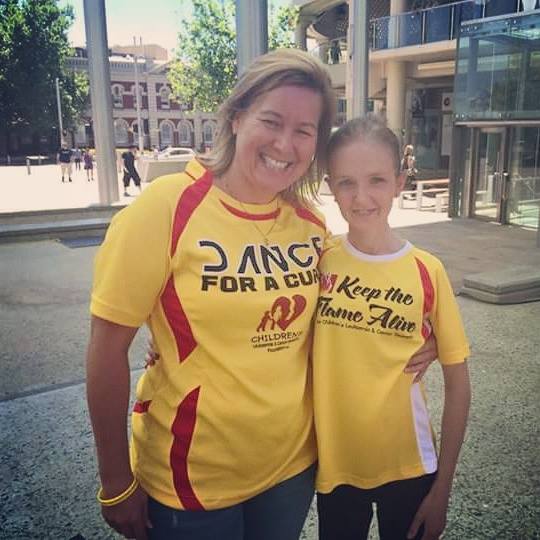 One final thing.  If you’re mortally afraid of dancing, don’t be.

“Don’t get bogged down on knowing the steps or learning the steps.  It’s about supporting an incredible charity, that’s a West Australian charity, that funds research at the Telethon Kid’s Institute, which is where all of the money raised goes.”

“The biggest things it that Dance for a Cure encompasses the whole community so, whatever way you want to be involved, you can be involved.  There’s no barriers to it.”

“We’ve filmed all of the public dance piece and all the choreography is broken down into sections and it’s all online for people to be able to do.”

“Our goal is to get a thousand people to this year’s event.”