On Thursday December 3, 2020, our wonderful CEO Andrea Alexander received a very special award at the Fundraising Institute Australia (FIA) End of Year Party and Awards, held at the Rendezvous Hotel in Scarborough.

END_OF_DOCUMENT_TOKEN_TO_BE_REPLACED

A Cause for Celebration with Beyond Bank

A few weeks ago we were absolutely thrilled to receive a donation $3,160 thanks to Beyond Bank and their kind customers, who have chosen CLCRF as their charity of choice with their Beyond Bank Community Reward Account.

The Beyond Bank Community Reward Account is a unique way for supporters (both individuals and businesses) to contribute to CLCRF.

It’s a high interest savings account which allows CLCRF supporters to save their money. And in return CLCRF receive a Community Reward Payment1, based on the combined average annual balances of all our supporter’s savings. Our supporters don’t pay a thing.

The earnings are not capped. So, the more supporters CLCRF have saving in this account, the more money will be rewarded to our organisation. Each year Beyond Bank donate over $400,0000 back to not-for-profit community organisations.

Show your support and head over now to Beyond Bank to start a Community Reward Account!

We are thrilled to acknowledge the recipients of the Building Excellence in Research Travel Grants – Anastasia Hughes and Anthony Buzzai. These worthy recipients have each received a $5000 grant from CLCRF, which has allowed them to attend important conferences to advance their respective research.

Anastasia Hughes, PhD student in the Leukaemia and Cancer Genetics team at the Telethon Kids Institute (TKI), received a grant to attend the 3rd Scientific Workshop on Tumour Microenvironment in the Haematological Malignancies and its Therapeutic Targeting in London from the 24 to 26 February.

This workshop is designed to promote scientific interaction between participants from all over the world and aims to present strategies to target haematological cancers in their tumour microenvironment. Anastasia will be attending this significant workshop with Dr Laurence Cheung, Senior Research Officer of Leukaemia and Cancer Genetics at TKI. Laurence will be using his CLCRF travel allowance from the Block Grant for this excellent opportunity.

Anthony Buzzai, PhD Candidate in the Cancer Immunology Unit at TKI, will be using his grant to attend the Keystone Symposia Cancer Metastasis: The Role of Metabolism, Immunity and the Microenvironment in Florence from the 15 to 19 March. This conference brings together biologists and immunologists who have a common interest in how cellular metabolism influences cell function and it encourages new collaborations between researchers to advance their knowledge.

It is important for the Foundation to continue funding these travel grants in order to provide young researchers with the chance to advance their research. We look forward to hearing more about the excellent opportunity these travel grants have afforded Anastasia and Anthony and we wish them both a safe and successful trip.

On 18 January 2018, AMP honoured several financial advisers for a lifetime of achievement. CLCRF chairman, Geoff Cattach, was amongst those who were honoured.

For over 50 years, Geoff has represented AMP and served in and around the Harvey community as head of Harvey Financial Services. Geoff takes pride in the fact that his first client from 1965 is still with him.

Geoff holds to core beliefs that have served him well for over 50 years. “I have always treated people with integrity. My attitude has always been: if you never tell a lie then you don’t need a good memory; treat everyone with morality and you will never be far wrong; empathy is most important as it is about your client’s life and their dependents.”

Children’s Leukaemia & Cancer Research Foundation’s (Inc.) Board and members congratulate Geoff Cattach for his outstanding achievement and thank him for the incredible contribution that he has made to the Foundation, the community and Financial Planning.

CLCRF wins FIA Award for Fundraising Team of the Year

On Thursday 7 December at the Resident Bar in Nedlands, Fundraising Institute of Australia celebrated their End of Year Awards Night. It was an opportunity to celebrate the successes of the year and highlight achievements of organisations within the WA fundraising sector.

Children’s Leukaemia & Cancer Research Foundation (Inc.) (CLCRF) were incredibly excited and proud to be awarded the inaugural FIA WA Award for Fundraising Team of the Year on the night.

“The team at CLCRF are incredibly excited to win this! What a fabulous way to start 2018,” said Andrea Alexander, Executive Officer of CLCRF.

The CLCRF are now in the running for the National FIA Award which will be announced in March 2018 at the FIA National Conference held in Sydney.

The Ball was themed ‘Farewell to Subi’ and it was a poignant night as Fremantle players joined club sponsors, members and fans to farewell Subiaco Oval as AFL games move to Optus Stadium.

A tour of the oval kicked off the night, followed by an evening of entertainment on the centre square of the oval’s hallowed turf. Guests were led into the stands and change rooms, and had the opportunity to have a photo at their favourite player’s locker.

Fireworks lit up the night sky before guests were served a three-course meal while Aaron Sandilands, David Mundy Nat Fyfe and Matthew Pavlich shared their memories of the venue.

CLCRF ambassador, Zoe Manuel, said, “the best part about the night was definitely meeting a few of the players and also listening to everything they have done in the past at the oval.”

As one of the Associate Friends of the Fremantle Dockers Foundation, the CLCRF was proud to be represented by two of our lovely ambassadors. A big thanks to Beyond Bank who generously donated the tickets so that our two lovely ambassadors could attend.

For the month of August 2017, Children’s Leukaemia & Cancer Research Foundation Inc. (CLCRF) was one of three charity organisations competing in the ‘Vote for Good’ Community Reward Grant Program held by Beyond Bank.

The organisation that had the greatest number of online votes on the Beyond Bank website by the end of August would be awarded a $10,000 grant from the bank. While CLCRF were mostly in the lead, the race to gather votes from the community was tense as the other charities were not lagging far behind with their votes.

At the end of the month, we waited with anticipation to find out which organisation had the $10,000 grant. We were not told who the winner was in September, however Andrea Alexander, CLCRF’s Executive Officer, was advised to ‘prepare a speech – just in case’ for the Community Reward Grant Awards Night in October.

Beyond Bank held the award night on Tuesday 3 October, and revealed the winner of the $10,000 grant. We were thrilled to learn that CLCRF had gathered the greatest number of votes from the community and won the $10,000 grant!

“Firstly, thanks to the Beyond Bank staff – they were the ones that chose the charities to support in WA, secondly to our wonderful supporters for voting for us and lastly but not less – to Beyond Bank for this amazing grant,” Andrea stated.

CLCRF wants to thank Beyond Bank as well as each and every single person who voted for us in the program. We could not have won without your wonderful support! It is because of Beyond Bank and your vote that we now have $10,000 to add to child cancer research funds! Rest assured that CLCRF will spend the $10,000 wisely.

Congratulations to our wonderful Treasurer, Kim Williamson, who was awarded a Certificate of Appreciation from the Commonwealth Bank of Australia in 2016.

Kim has been the Secretary of the Foundation since its inception 30 years ago and Treasurer since late 2002. Prior to this he was the Administrator of the former Princess Margaret Children’s Medical Research Foundation (Inc.)

This is a well-deserved recognition of Kim’s long and dedicated service to the CLCRF.

END_OF_DOCUMENT_TOKEN_TO_BE_REPLACED

Award for Andrea and Wendy 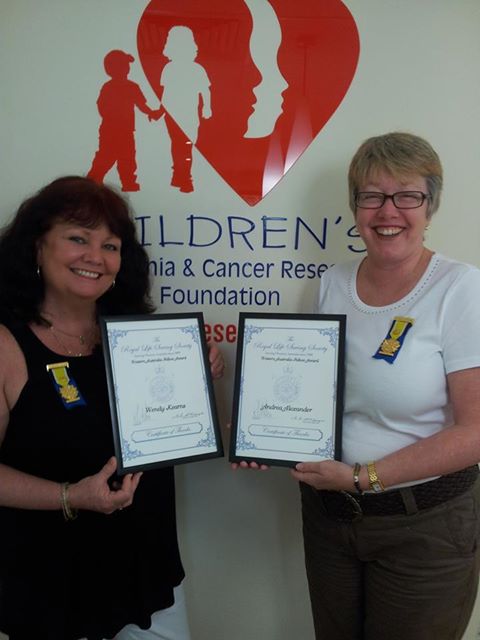