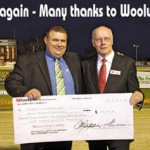 The evening was also supported by GreyhoundsWA and featured a Monster Raffle as well as a huge auction with bidders competing for signed memorabilia and donated items from a wide selection of supporters which raised further funds on the night.

Foundation Chairman Geoff Cattach paid tribute to Woolworths for their ongoing support commenting that “Not once do we take the support of Woolworths for granted, we appreciate your fine efforts and rest assured every cent is watched over and used wisely. Once again from all of us at the Foundation our profound thanks to everyone involved for raising such an outstanding amount.”