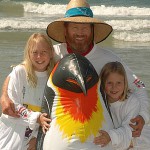 Also there was his long-time mate and Prevelly neighbour ‘Barbecue’ Bob O’Connor who Patrick says devised the successful commonsense approach to long distance cycling: stop every hour for water and every other hour for a snack and water.

Asked how it felt to achieve such a long-held goal Patrick replied: “Quietly satisfying. I have set myself some unusual goals throughout my life and achieving them all is quietly satisfying.”

Patrick has been riding to raise funds for the Children’s Leukaemia & Cancer Research Foundation (Inc) and his efforts in the saddle have amassed more than $30,000, and the total is climbing.

As he cycled to the beach this morning he was stopped by members of the Old Bar community club and presented with a cheque for more than $1000, one of the biggest such fundraising efforts of the trip.

Then a bowls championship was interrupted as players stopped to welcome Patrick and stuffed about $200 in his donations tin.

The appeal remains open until November 13, the day before Patrick boards a plane home from Newcastle. Details below on how to donate.

Patrick says he has one regret: that two big mountains beat him in the second last day of his trip. Two monsters in the Buckett Range had Patrick off his bike and walking, the first time in the 80-day trip.

But, he also said that the mountains had taught him the lesson that on the journey you should remember to take time out to admire the view.

He said he was considering going back and having another crack at them before he flew home.

This afternoon Olivia and Hannah will shave off the big red beard that Patrick has grown in the past 80 days to protect his fair Irish skin from the sun.

On Friday he will deliver a goodwill letter from the Augusta-Margaret River shire president to the Taree Mayor, Eddie Loftus, and at 2pm he will attend his old primary school, St Josephs, where he will talk to the students about his trip. It’s Hannah and Olivia’s school and they have been keenly following Patrick.

At 6pm on Friday evening he will meet up with a host of old school friends from the Year of 72. The venue for the reunion has been changed from a local hotel to The Waterfront.

‘Patrick’s epic ride across Australia was a wonderful gesture in support of people in need. It was a great example, I think, of how so many Australians are prepared to dedicate themselves to the service of others.
Pedalling Penguin Patron Michael Chaney

Patrick visited the Andrea and Wendy on the 15/11/06 to officially announce that approx $30,000 has been raised from the appeal.

The Children’s Leukaemia & Cancer Research Foundation would like to congratulate Patrick on his mammoth journey and thank him sincerely for his support of the Foundation’s work.