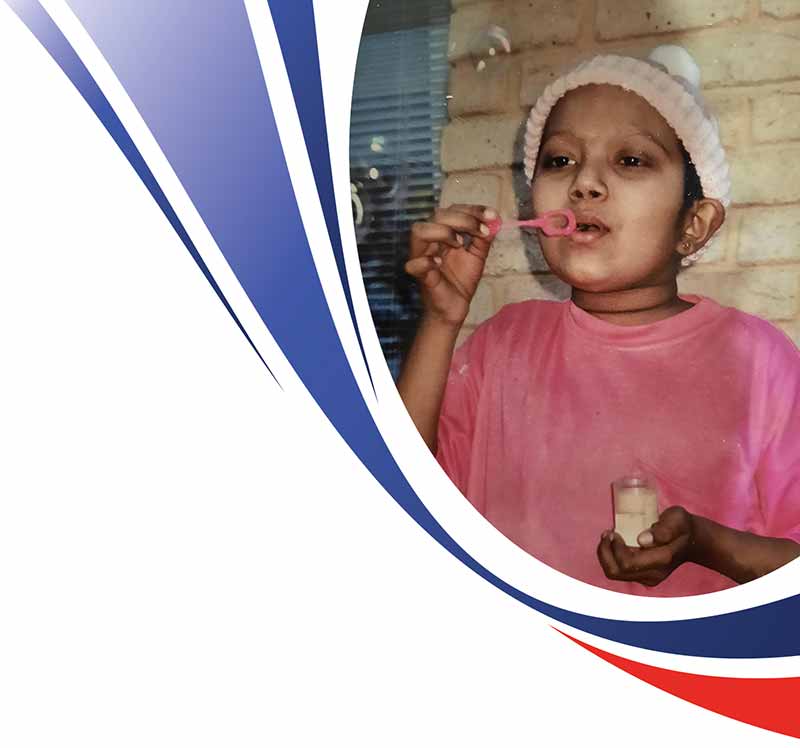 This tax time, I would like to introduce you to a wonderful friend of the Foundation, Therese Weldt. Therese was diagnosed with Acute Lymphoblastic Leukaemia (ALL) when she was 10 years old and living in Sri Lanka. Now, Therese is in her late 30s, living a life her family could have only dreamed for her.

It wasn’t an easy journey for Therese to get to where she is today. It took a long time for doctors to diagnose her in July of 1994. She suffered from lethargy, fevers, a loss of balance and unexplained fainting spells. Symptoms that would be terrifying for anyone, let alone a child.

“Because the symptoms were so vague, the doctors kept putting it down to the heat in Sri Lanka,” said Therese. “Then, because my dad was working away in Saudi, one of the doctors diagnosed me with depression. They thought I was experiencing the symptoms because I was upset he was away.”

Therese then had an allergic reaction to a medication she was prescribed, which landed her in hospital. The doctor decided to do further investigation into her illness but still failed to identify the leukaemia. “I was misdiagnosed with typhoid,” Therese said. “The symptoms were very similar to typhoid, which is common in Sri Lanka. I was in hospital for about two weeks, but my fevers weren’t going down.”

Many children with cancer are initially misdiagnosed, making their battle even more gruelling. By supporting childhood cancer research, you can help us ensure children can be more easily diagnosed and treated.

Therese was finally diagnosed with ALL later that year. “My parents were devastated,” she said. They then had to make the decision of where Therese would receive her treatment. “The protocols for treating leukaemia in Sri Lanka weren’t up-to-date,” explained Therese. “So, my parents, in consultation with an oncologist, discussed ways of getting me treatment elsewhere.”

Her parents heard about a child being successfully treated for leukaemia at Princess Margaret Hospital (PMH) in Perth, so the original plan was to go there. Although, thinking it would be better to stay close to family, they decided she would go to Hong Kong.

“My mum’s older brother was living in Hong Kong at the time. His wife was a doctor and knew the hospital system,” said Therese. “My uncle’s place was beautiful, but things went south from there. I already started my treatment protocol in Sri Lanka. Then, when they started treatment in Hong Kong, they ignored the protocol that was already done.”

Therese received double the amount of chemotherapy doses by the end of her first course of treatment. “I went into liver failure, and they didn’t diagnose it on time,” she said. “They kept saying it was the weather because it was monsoon season at the time.”

No child should have to face the harsh reality of cancer. By making a tax-deductible donation to CLCRF, you can help make sure more children can live the lives they deserve.

Therese’s mum, Theckla, decided to forgo the Hong Kong plan and go back to the original plan of Perth. “I was so unwell that I could not get medically cleared to fly,” Therese explained. “But Mum decided ‘stuff the medical clearance’ and signed all the documents saying if anything happened to me, she’ll take full responsibility.”

To make the whole experience even more gloomy for Therese, she spent a lot of time away from her younger siblings who were still in Sri Lanka. “I was away from my brother and sister for about five months,” she explained. “My brother was only four and my sister was going on six. It was so hard being away from each other. I missed them a lot.”

Her family finally saw a glimmer of hope when Therese’s treatment began in Perth. “I remember being happy about the treatment here,” she expressed. “Of course, there were very unpleasant times. There was pain, nausea and vomiting from the chemo. But they were very patient focussed. We were staying at Ronald McDonald House and once we realised families could come and stay, my brother and sister came over.”

Childhood cancer takes a toll on the whole family, not only the child diagnosed. You can help ensure fewer families have to endure this struggle by making a donation to CLCRF today.

Therese’s cancer battle was hard on everyone in her family. “My mother was in the middle of building a house that was going to be our forever home,” recalled Therese. “But we had to stop building. Even still, my mum has a lot of things she brings up because it really affected her. I don’t know how she did it, but she did.”

Therese was also separated from her dad during treatment. “I admire my dad as well,” expressed Therese. “He was the main breadwinner. So, he had to continue working in Saudi, otherwise we would have never been able to afford my treatment.”

The treatment protocol for Therese involved chemotherapy and radiation, both causing long-term side effects. “The side effect I notice most is back pain,” Therese said. “I get episodes of nerve pain, but I’ve learned to live with it because it doesn’t stop me from going to work. Part of going through the experience I’ve had means that I don’t need to stop for things like that.”

Many childhood cancer survivors become infertile because of the intense treatments endured. Therese was warned that it would be hard for her to conceive, but as someone who always loved children, she held out hope. After spending a year trying to fall pregnant with her then husband to no avail, it seemed like Therese’s dream of being a mother may not be possible. Yet, a year later when she went to the GP with an upset stomach, she received the wonderful news that she was expecting a child.

Growing up to have children of their own is not always an option for childhood cancer survivors. By supporting childhood cancer research, you can help scientists find better treatments that result in less harmful side effects. 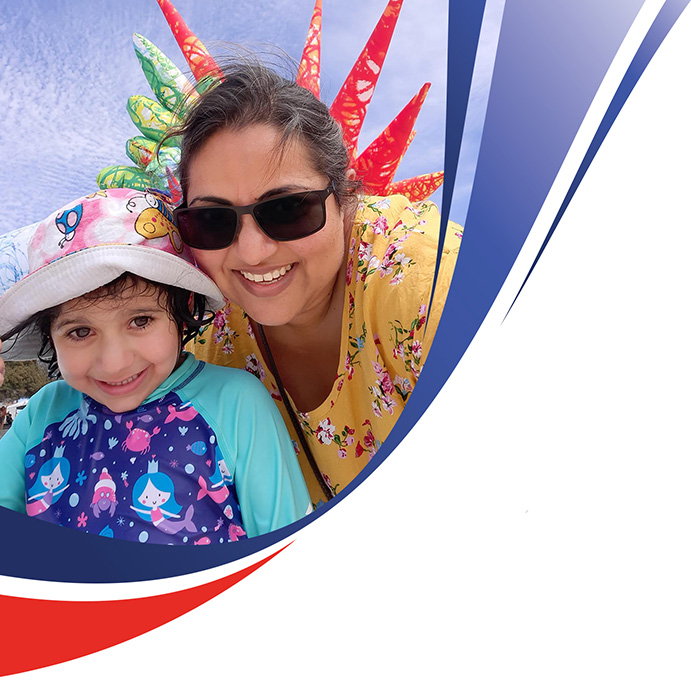 Every new mother is naturally worried about the health of her baby during pregnancy. Because of the gruelling treatment she went through, this was a greater cause for concern for Therese. “I was worried about the viability of the pregnancy,” she explained. “Plus, I was working at King Edward Memorial Hospital so I would see the worst of the worst cases. There was definitely anxiety.”

Therese fortunately gave birth to a healthy baby girl named Gaia in October 2016. “She changed my life,” Therese expressed. “At first, I experienced post-natal depression because it’s overwhelming, you don’t realise how much you don’t know. Since I got through that, being a mother has been amazing! Gaia is resilient, switched on, and a delight.”

When asked about her anxiety as a mother, Therese admits it’s still there. “It’s always there, in the background,” she said. “I’m not thinking about it every minute, but it pops up. Especially when Gaia was diagnosed with osteomyelitis at one and a half years old. It drove me insane because for a while they couldn’t diagnose it. It was a scary time.”

The trauma of childhood cancer can cause many survivors to experience symptoms of anxiety, even when treatment is over. A donation towards CLCRF will help make sure future generations don’t have to go through this hardship.

Therese now works as a clinical nurse at King Edward Memorial Hospital. “Nursing wasn’t my first decision after high school,” she said. “I knew I wanted to be in science, I was always interested in science because of what I’ve been through.” Confessing she loved to study, Therese studied molecular biology, biomedical science, forensic science and toxicology.

She was offered a research assistant job from her postgraduate supervisor but was unable to find job satisfaction. As a volunteer first aider with St John Ambulance at the time, Therese was involved in patient and client care.

“This is where I met nurses and midwives who inspired me to go into nursing,” said Therese. “I love nursing. It was the best decision. There are hard days but it’s rewarding because I feel like I’ve contributed and helped people who are facing medical complications.”

I met Therese and her family back in 1995, when Therese was undergoing her treatment at PMH. They immediately became involved with the Foundation, understanding the importance of raising awareness and funds for childhood cancer research. Therese and Theckla have remained CLCRF members ever since, with Gaia now a member too.

In Australia, an average of 750 children are diagnosed with cancer every year. With numbers expected to rise, we must act now so future generations of children can live long and fulfilling lives.

Therese had a beautiful spirit when I met her all those years ago and her battle with cancer has only made her stronger. Her experience has encouraged her to always live life to the fullest, especially because other children sadly do not come out on the other side. “I have been through cancer treatment and am grateful to have benefitted from the contributions of medical research,” expressed Therese.

Many children are still tragically losing their lives to cancer. It is the leading cause of death from disease in Australian children. This tax-time, you can help make a real difference by making a donation towards childhood cancer research.

Therese’s survival would not have been possible without the advancements made through childhood cancer research. By continuing to support the amazing scientists doing the research now, we can help more children win their battles against the awful disease and live a rewarding life.

If you’ve already made a gift to help children like Therese, thank you so much. If not, will you please help today? As we do not receive State or Federal funding, we rely on your compassion and generosity to help us ensure better outcomes for children.

P.S. Too many children are deprived of living the lives they deserve. Your tax-deductible gift will help ensure more children can come out on the other side of their cancer battles.